Social and economic situation of the Municipal Formation

The Dinskaya district is situated 30 km from the regional center  the city of Krasnodar. High investment potential of the Dinskaya district attracts the attention of Russian and international business structures. The Municipal Formation Dinskaya District of the Krasnodar region is rapidly developing and has a strong reputation as one of the most investment attractive Municipal Formations of the Krasnodar region.

Its convenient geographical location is the advantage of the district: it borders with the regional center, the Ust-Labinsk, Korenovsk, Timashovsk, Kalininskiy and Krasnoarmeyskiy districts and the Republic of Adygea. There are three rivers  the Kuban, Kochety and Ponura rivers  on the territory of the Dinskaya district; they are suitable for fishery purposes and arrangement of sports facilities for recreational fishing.

The total area of the district is 135 196 hectares that is 1.8% of the total district of the Krasnodar region. There are 10 rural districts with 27 settlements on the territory of the Dinskaya district; the population is 141.4 thousand people. The administrative center is the Cossack village of Dinskaya.

The Dinskaya district territory is crossed by three railway lines of national importance, which provides passenger and freight services from different regions of the country through the city of Krasnodar to an important port on the Black Sea coast, the hero-town of Novorossiysk and through the Kerch Strait to the Crimean peninsula. There are two major railway hubs in the Cossack villages of Dinskaya and Novotitarovskaya.

Mineral resources are represented by clay and loam. Brick and tile raw materials produced in the Dinskaya, Vasyurinskaya, Plastunovskaya, Naydorf and Ponurovskoye fields used for own needs of enterprises of the construction industry of the district.

The development of the district economy increasingly meets the requirements of the time. Thanks to new activities, the economy of the district focused on the agricultural sector has become a diversified, which is more resistant to economic "extremes".

Industry, agriculture and retail trade are basic industries in the district.

The agricultural sector of the district consists of 17 large and medium-sized enterprises, more than 440 peasant farms and 38,982 private farms that labor more than 91 thousand hectares of the cultivated area.

The volume of products shipped by the agricultural enterprises in 2016 amounted to 5,977.9 million rubles.

The industry sector of the district consists of 24 large and medium-sized and more than 200 small enterprises. The food processing industry and the construction material production are main developed branches of manufacturing industries here.

Large enterprises of the processing industry, such as Bonduel-Kuban LLC, Dinskaya Meat Processing Complex CJSC, Kubanmelproduct LLC, Dinsk-Sakhar LLC and others produce about 50% of the total volume of industrial output. Canned fruits and vegetables, confectionery products, sugar, sausages, bread and bakery products, flour, cereals, seed-oil, soft drinks and a number of other products are produced in the district.

The construction industry of the Municipal Formation Dinskaya District is represented by the industrial production of construction materials:

Such high-tech enterprises as Krasnodar Compressor Plant LLC, Kubanelectroshchit LLC implemented their investment projects in the territory of the MF Dinskaya Region.

The consumer market is booming. Sustained economic growth and rising per capita income is a main trend of the economic development, which is inherent in an increase of the share of services and consumer markets. The entire demand of the population is fully provided with supply of basic consumer goods and services. The small business sector, which accounts to over 80% of total turnover and sales of domestic services take leading position in the consumer market.

The retail trade is a basic branch in the consumer sphere. The retail trade turnover amounted to 4,843.2 million rubles in 2016; a growth rate was 107% compared to 2015. 2,600 business entities including 2 large and medium-sized ones operated in the retail trade in 2016.

Dynamics of the production of goods and services, mln rubles

During the period from 2013 to 2016, the following investment agreements were implemented:

The implementation of the first stage of the facility on the integrated development of the north-eastern part of Yuzhnoye Town of the Dinskaya District was completed (investor: DEVELOPMENT ATRIUM LLC).

The implementation of a major investment project included in the priority projects of the Southern Federal District  the construction of a greenhouse complex in Plastunovskaya Cossack Village was completed (investor: Tander CJSC). The works on the expansion of the cereal packing department are being continued currently. 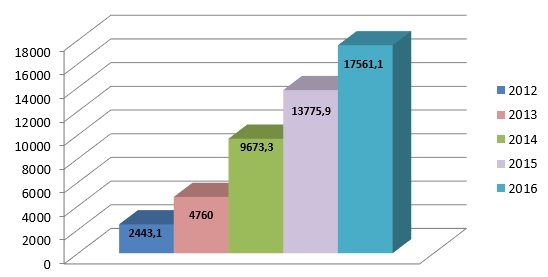 The following large-scale investment projects were implemented in the territory of the Municipal Formation Dinskaya District:

Construction of the Canned Vegetables Factory (for the production of green peas and sweet corn) (Bonduel-Kuban LLC) in Novotitarovskaya Cossack Village. The volume of investments amounted to 204.0 million rubles.

Construction of the center for glass industrial processing and distribution (Russian Glass Company CJSC). The volume of investments amounted to 293.0 million rubles.

Construction of the plant for manufacturing polymer pipes for water supply and gas supply (YUGTRUBPLAST Plant LLC). The volume of investments amounted to 98 million rubles.

Construction of the workshop for manufacturing products of autoclaved aerated concrete (Combine of the Kuban Wall Materials LLC). The volume of investments amounted to 870,0 million rubles. The second part of the project  the construction of a logistics complex - is being implemented currently.

Construction of a greenhouse complex in Dinskaya Cossack Village (Ekogeos LLC, Krasnodar). The volume of investments amounted to 387.0 million rubles.

Construction of the oil mill in Staromyshastovskaya Cossack Village (Solaris LLC). The volume of investments amounted to 370 million rubles.

The implementation of key advantages of the investment development of the Municipal Formation Dinskaya District will contribute to:

Increase the well-being of the population and achieve financial and budgetary self-sufficiency in the district as a whole;

Development of new productions and improvement of existing production capacities, creation of additional jobs and increase in tax revenues to budgets of different levels;

Attraction of investments and new companies to expand the range of products and improve their quality;

Entering new markets including foreign ones.